I wrote a piece for RayWenderlich.com about Collection Data Structures in Swift, and I did a whole lot of performance testing around it that didn’t have room to make it into that piece. I’m going to be going into waaaaay more detail and burying you in charts in this blog post if you want to dive deeper.

The short version is included in that piece: Creating collection data structures in Swift is a hell of a lot faster if you use Foundation classes rather than native Swift classes, but searching through them and manipulating them is either even or faster using Swift native classes.

Big-O notation is a computer science concept that defines the worst-case-scenario performance of any function which operates on any kind of data structure. I’ll be referring to performance degradation of these collections using Big-O notation, so here’s a quick refresher on how it works:

When you see Big-O notation written as O(n), O is the notation for the number of operations performed by a function, and n is the number of items in the data structure the function is being performed upon.

The most commonly seen types of Big-O notation are as follows, and are ordered from best to worst performance: 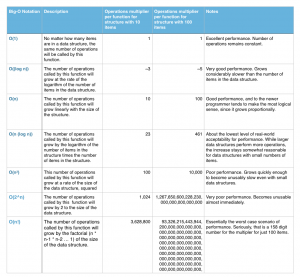 If you’re a more visual learner, an interactive chart showing the rate at which each of these functions will grow visually is available here.

Notes On The Tests I Ran

I’ll note that when I was posting complaining about the difference between optimized and unoptimized, I had an interesting back-and-forth with one of the Xcode engineers on whether performance testing with optimization on is a good idea:

@designatednerd To catch regressions relative change matter, absolute values not so much. Use it to lock in known good perf @isaacgreenspan

I’ll stand by my assertion that if the raw tests are taking 3 hours vs. 3 minutes, something’s screwy.

Anyway, or each of these data structures, you’ll see the performance comparisons for:

Since the number of items is increasing by 5 times, the relative speed with which each operation increases in terms of Big-O notation would follow the following chart: 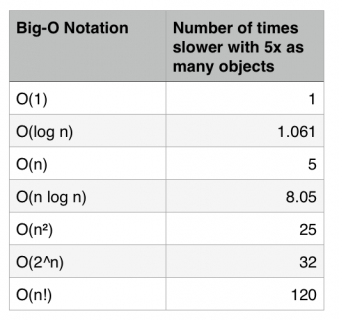 NOTE (added 10/4/2014 2:20pm): Ryan Govestes pointed out that O(n) is technically referring to the number of functions called changes, not the rate at which the time it takes to call functions is changing. This is certainly a key distinction, but in a situation where we can’t see what functions are being called, the practical implications of how long it actually takes to perform the functions are a reasonable way to approximate this.

So how did Swift and Foundation classes actually perform? It’s time for the parade of charts!

First up, creating an array: 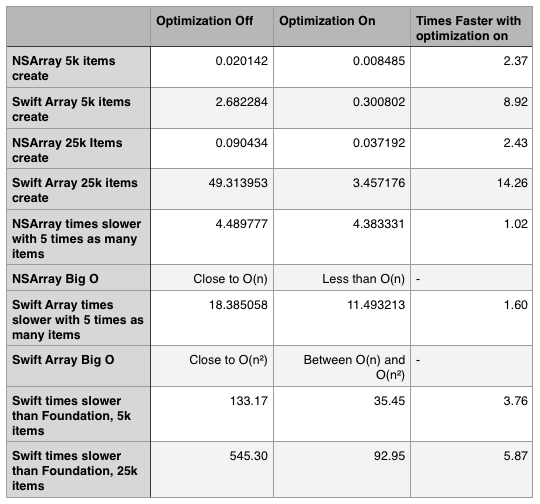 But really, most often, you only create an array once. It’s always the most computationally expensive part of what you need to do. What about adding an object? 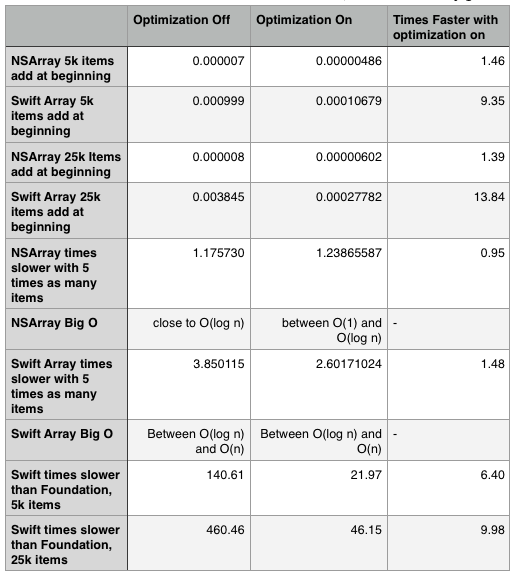 Adding an object at the beginning 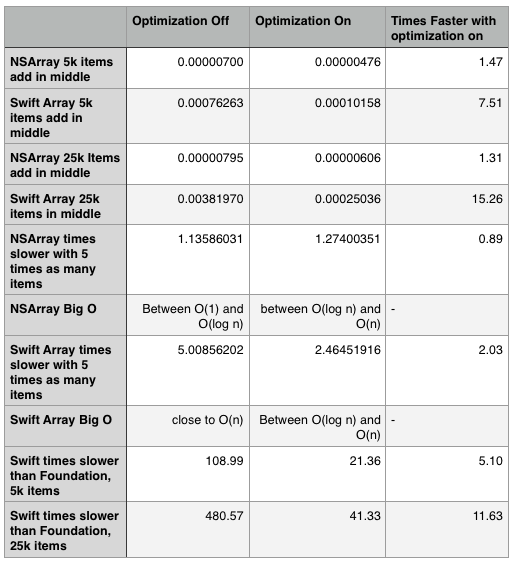 Adding an object in the middle 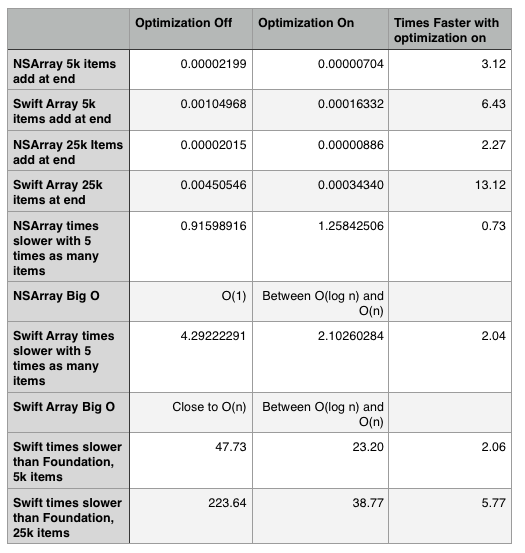 Adding an object at the end

With optimization on, Swift Arrays actually grow at considerably lower rate than NSMutableArray when inserting items at the beginning of an array, and never get worse than O(n) no matter where the insertion occurs.

NSMutableArrays are still at least 23 times faster than Swift Arrays, but even in the worst case scenario, the insertion time has dropped from hundredths to thousandths of a second for Swift Arrays.

Swift Arrays are still somewhat slower than NSMutableArrays, but the difference goes from millionths of seconds to thousandths – if you’re not working with a very large number of items, this performance difference is not going to affect your application.

One odd thing to note: NSMutableArray performance adding an object at the beginning of an array actually got worse with optimization on. There’s not really a good way to know why without knowing about the internals of NSMutableArray optimization, but it’s certainly interesting to note that turning on optimization doesn’t always make things faster.

Next, take a look at the performance of removing items: 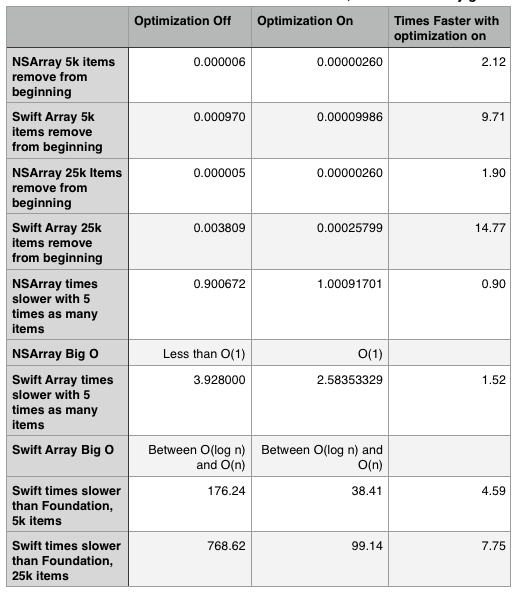 Remove from the beginning 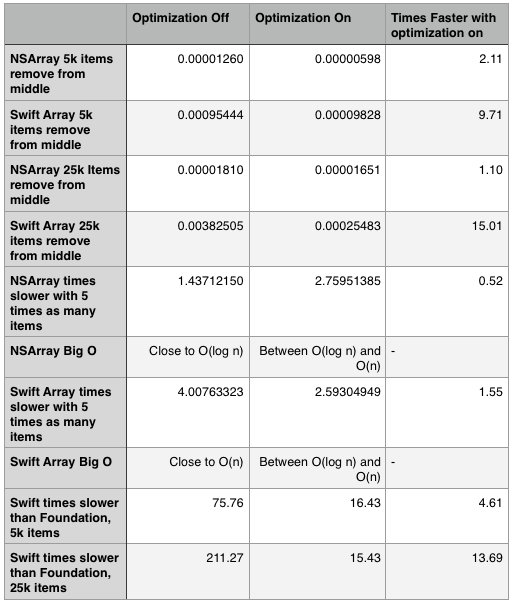 Removing from the middle 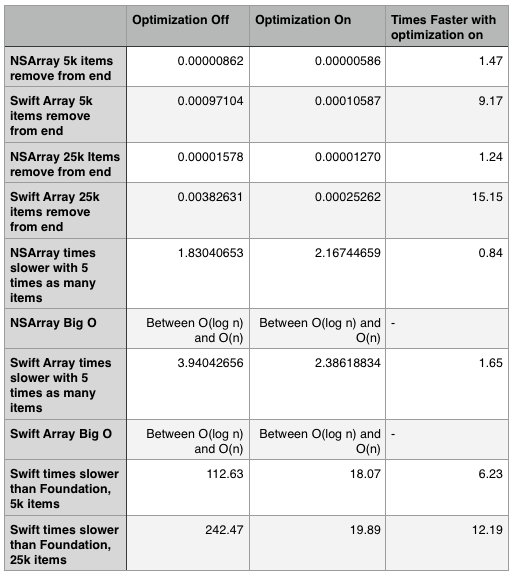 Removing from the end

Optimization again makes a tremendous difference, but you can see that even with optimization on, removal takes longer with Swift than it does with an NSArray, and the performance degradation in Swift is considerably more obvious.

Next, look at the performance of looking up specific objects or indexes in an array: 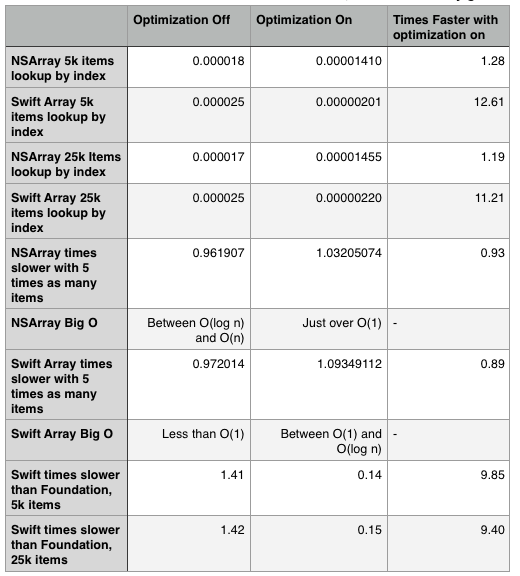 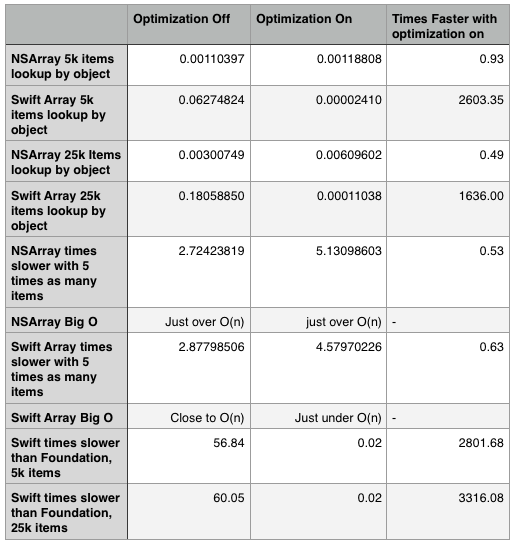 Aha! Here’s where Swift earns its name, even without the assistance of optimization. This explains some of why Jesse Squires found that Swift Arrays are faster at sorting than NSArrays as of Xcode 6 Beta 5. With bigger arrays, the Swift Array's performance is actually 50 times faster than NSMutableArray's for looking up by object.

Swift Arrays' type safety certainly helps a lot for lookup by object, which operates without the overhead of having an array which could contain any object. NSArray has to first determine the type of each object, then figure out if it is equal to the object you’re seeking.

Why did I use fewer items in the dictionary tests in the array tests? Firstly, Dictionary creation in both Swift Dictionaries and NSDictionaries is considerably more expensive than NSMutableArray creation – if you compare the numbers for each, you’ll see that they’re similar or worse with 1/5th the number of items.

Secondly, Swift Dictionary creation with optimization off is particularly terrifying: 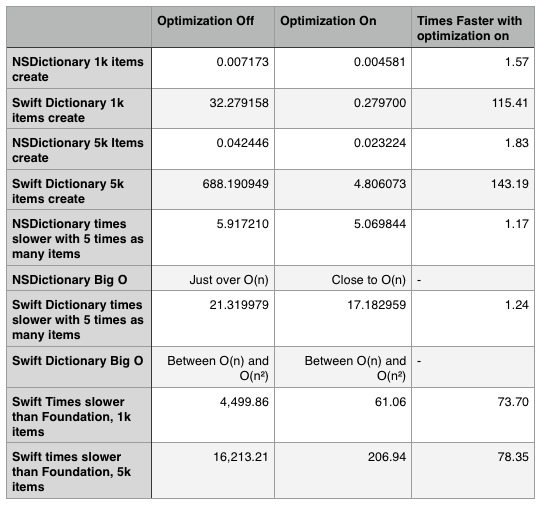 A 5,000 item Swift Dictionary took over sixteen thousand times longer to create than its NSMutableDictionary counterpart with optimization turned off. 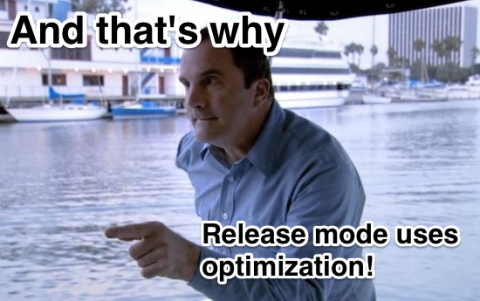 Since dictionaries store objects without any particular order, you can only test adding or removing a given number of objects to them. Here are the results for adding 1, 5, and 10 dictionaries: 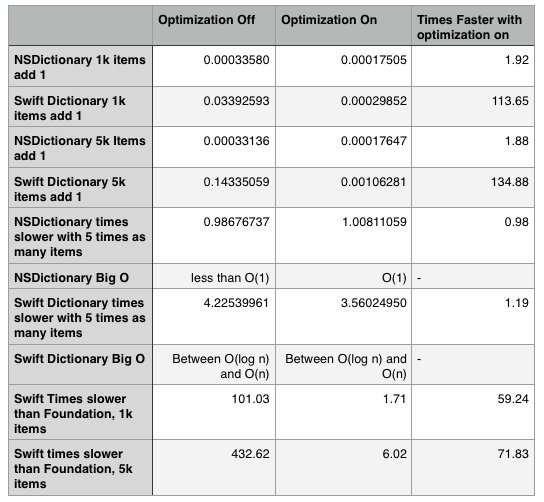 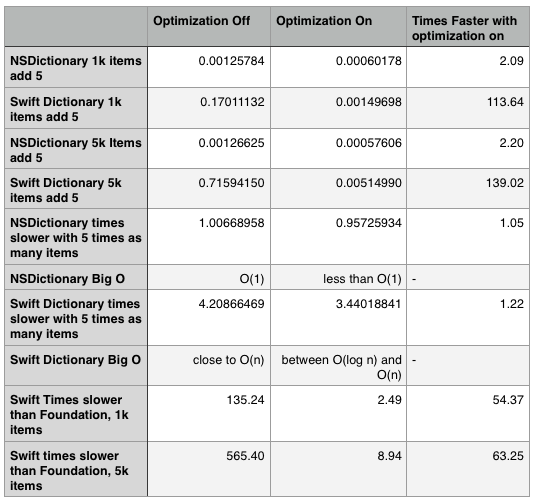 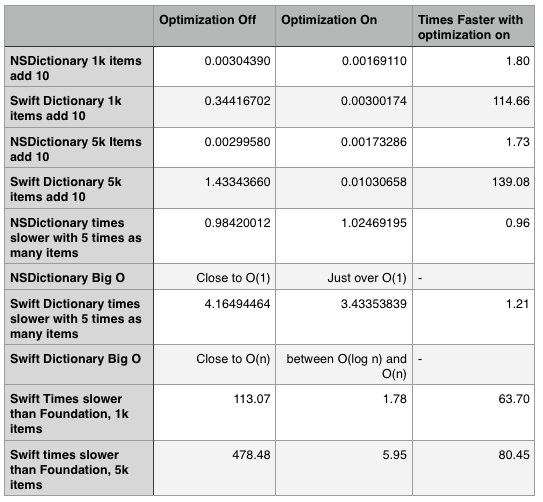 Swift Dictionaries‘ numbers against NSMutableDictionary are certainly a lot closer, but even bumping up from 1,000 to 5,000 items, you still see a major increase in the difference between the two. 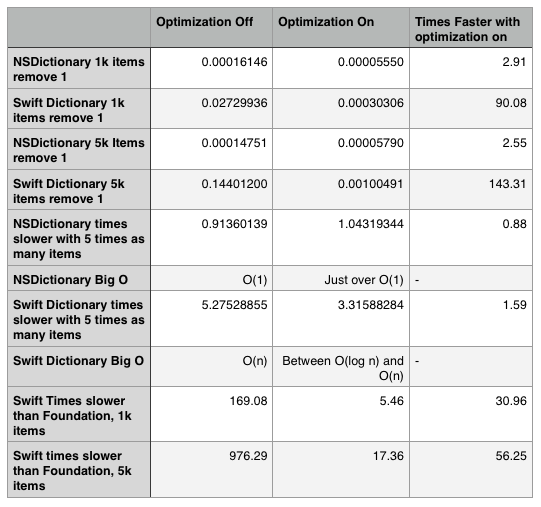 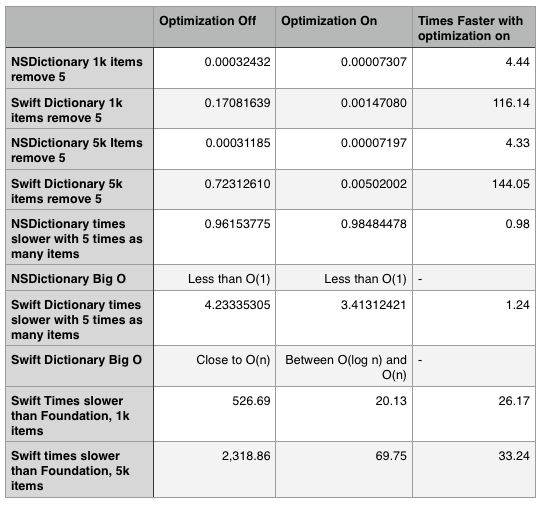 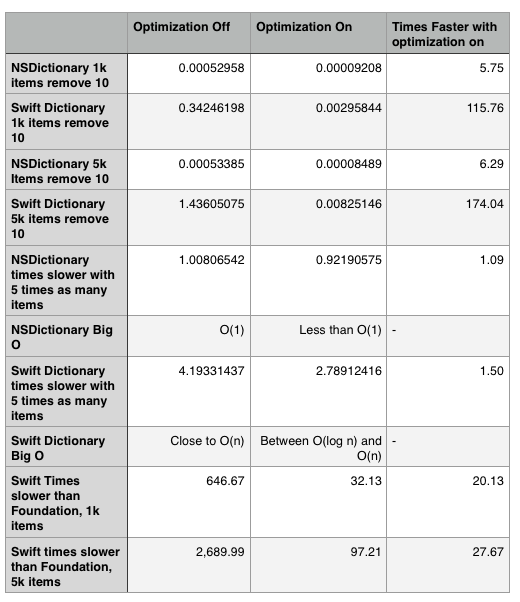 Again, NSDictionary is never more than O(log n) times slower with more items, which for dictionaries of this size is very close to O(1). This is exceptionally strong performance.

In dictionaries, you use the value of the key to look up an object – there is not a straightforward way to look up a value without its key. Therefore, here the tests are looking up either 1 random object or a batch of 10 random objects: 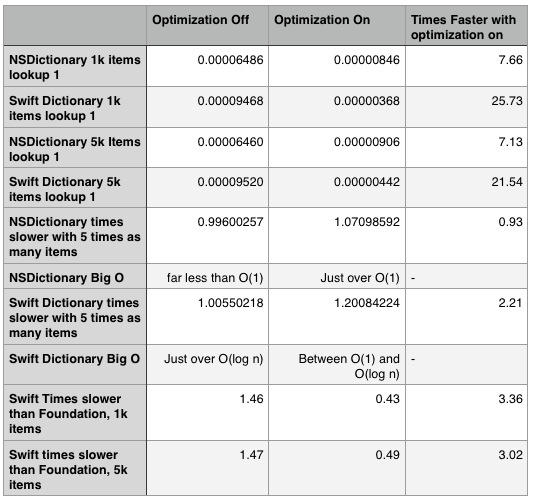 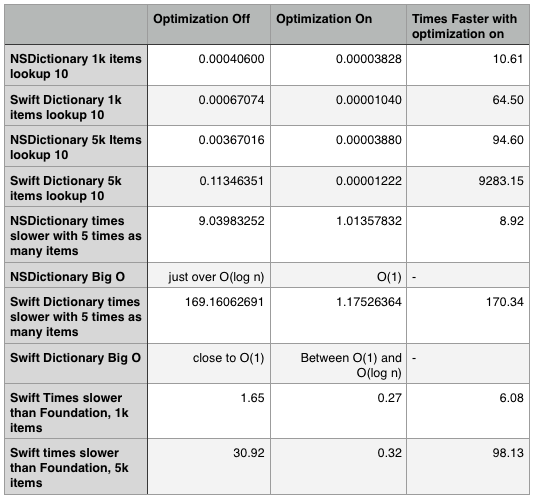 Once again: Swift is…swifter, even with the optimization off.

The performance doesn’t improve quite as dramatically as it has from NSMutableArrays to Swift Arrays, but being more than three times as fast at a 5000 item size is still a significant improvement.

Sets are also the one major type of data structure in iOS that does not (yet) have a Swift-only equivalent to its Foundation API. Therefore, I only looked at NSSet.

NSMutableSet performance clearly improves more with optimization on than NSMutableArray and NSMutableDictionary, but the rate of degradation sits squarely near O(n) in both cases as the set gets larger.

If you’re looking for pure speed, the NSMutableSet isn’t great – if you compare the numbers here to the numbers for NSMutableArrays, set creation is considerably slower. But that’s the price you pay for needing to check if every single item in a data structure is unique.

How about adding items? Here are the numbers for adding 1, 5, and 10 items:

Removing an item from an NSMutableSet is considerably faster than adding an item – after all, no check as to whether the item is unique is required to remove it.

And here are the numbers for looking up 1  and 10 items:

And again, with the caveat that I haven’t had time to rerun these tests against Xcode 6.1/Swift 1.1:

If you’re using Swift, if you simply need to create and store large arrays or dictionaries without doing much lookup work, you should create them using Foundation classes, because it will be considerably faster.

I encourage you to run the (optimized) tests on iOS 8.1 and see what’s changed – I really do wish I’d had time to do that, but I really just haven’t had the opportunity.

Got more questions, want to tell me why my measurements are BS, or want to further dissect these numbers?  Please feel free to leave a comment